Every now and then I crave certain foods that were such a common thing back home. I reminisce about last-minute brunch dates with friends or sisters at one of our favorite spots, La Boulange, a cute French bakery and cafe style place. I loved getting the bowl of homemade granola with creamy Greek yogurt, fresh fruit and a big cappuccino. So simple, so tasty and oh so satisfying!

Well, hello friends. I hope you have all had a wonderful holiday season with friends and family. Christmas has come and gone, but my beautifully lit tree still stands, proving us with warmth and cheer, reminding us that the holidays are not quite over (which I’m actually happy about). As I sit here and sip on my delicious cappuccino, and enjoy the peace and quiet of our home this morning now that my in-laws have left, I thought about how this year has literally flown by. We’re about to start a new year and a new chapter in our lives, which made me start to think about all that 2014 entailed.

It snowed today for the first time this winter and basically… … This just captures it all. As a California girl (who’s also lived briefly in Thailand and Florida, i.e. tropical places) living in Milan, I can’t, for the life of me, figure out how the women over here manage to look so glamorous in their high heels and cute little stylish jackets – prancing around the cobblestone streets (a feat of its own without snow) – while I’m simply trying to stay warm and comfortable and avoiding, as best possible, to not die of hypothermia or lose my toes to frostbite.

It has never ceased to amaze me how matching pairs of socks go into the washing machine & dryer, and like magic, when it comes time to rejoin them, “voila!” there’s only one and the other is no where in sight. Sometimes it starts to feel like someone is playing a joke…

Earlier today I was thinking about where I was in the beginning of 2012, the thoughts that were running through my mind, and where I am now, at the end of 2014, and I started reflecting on all of the events (both little and not so little) that have happened over the short two and a half year timeframe. And the thing is, if I look at it like a backwards domino effect, I realized that it all started with one decision. One big decision. The question at hand was, ‘do I resign from my tech job in San Francisco and go on an adventure that I had been craving (and kind of “wing” things for a bit)?’, or ‘do I stay because it’s safe, secure, comfortable and lucrative?’ 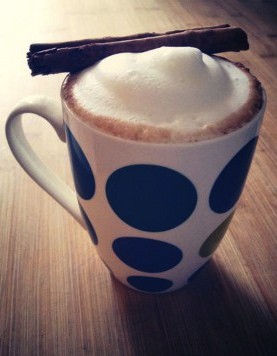 I’ve been contemplating seasonal changes the past couple of days. Both literal and not. With the summer, family and friends gone, fall has appeared, almost overnight: the rain, the cold and the overcast skies. And while initially I was pretty bummed, I was reminded, while running errands today, that we can find beauty in the changing seasons: embracing each new chapter and learning to be content, which in the process brings amazing peace. Starting with a homemade chai latte to (finally accept) and welcome the fall 🙂

Venice, ItaliaVenezia, Italia: Sei bellissima! My husband and I just returned from a lovely little...January 16, 2016

South African SafariAfter spending a week in Cape Town and along the southern coastline, I headed...January 7, 2016

Exuma, BahamasAs I sit here in Milan, freezing my little butt off, I can’t help...January 6, 2016

Sorrento, ItaliaSorrento, situated at the northern end of the Amalfi Coast, is one of my favorite...January 6, 2016

Cape Town Coast, South AfricaImages from my visit to South Africa a few years ago. The Cape Town...January 6, 2016

l’isola di Capri, ItaliaThe island of Capri: One of the many stunning places to see while in Italy.  Located...October 28, 2015

Koh Phangan, ThailandEven after all this time the sun never says to the earth  “You owe...October 27, 2015

Hello! And thanks for stopping by my blog, I hope you enjoy it. Looking forward to hearing your comments and thoughts. For a little more about me, check out the 'about' section.